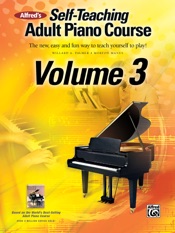 There was once a famous singer who, two-thirds of the way through his performance, would shout out to his audience, “You ain’t heard nothin’ yet.” We think you’ll feel the same way about this volume as you start performing songs of increasing complexity and popularity as you continue to learn and play the piano.

Vol. 3 begins with a short section on music theory. Scales are the theoretical foundation of all music and we start by learning how they are formed. Is music theory hard? No, it’s easy and fascinating. From scales, chords are formed – and so on. With this understanding, performing on the piano will become much more meaningful to you.

New music includes Joy to the World, Cockles and Mussels, Got Those Blues, On Top of Old Smoky, The Can-Can, The Marines’ Hymn, Why Am I Blue?, Little Brown Jug, O Sole Mio, Jericho, Greensleeves, Scarbrough Fair, He’s Got the Whole World in His Hands, Scott Joplin’s The Entertainer and Amazing Grace.

As a special bonus, the end of the book includes music and an audio of Over the Rainbow, At Last, Singin’ in the Rain, Laura, and Have Yourself a Very, Merry Christmas.